Is a bidet for a man or woman? In a nutshell, YES, it can be used by a man or woman; so it is not specifically designed for any particular gender, ethnic group or culture. The question of who should use a bidet has been the majorly asked for new bidet users, and those who want to understand the genuine concept of ‘bidet’.

The understanding and assimilation of why a man should be using a bidet like the women might sound confusing for many people. As women are believed to be the only gender that should care more for their private parts.

To make it easier to understand; It is merely because everyone ‘poops’ and the opening of the human end of the alimentary canal, ‘rear region’ is the same for all gender. After you are through with your “toilet business”; the better (close to the best) way to get a cleaner behind is by using a bidet.

Even if you are a man or woman, having pieces of several residual of feces after wiping can create an awful smell and as well forms bacteria. You might not perceive it, but certainly, the person sitting next to you might. Using wet wipes or tissue paper might be useful but not as good as water. 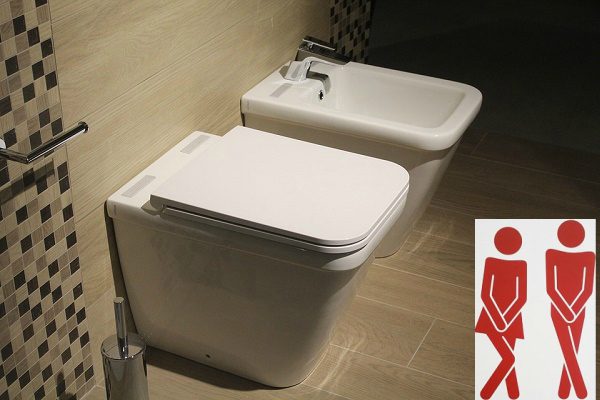 Is a Bidet for a Man or Woman? How to Use a Bidet as a Woman

To use a bidet as a woman depends on the type of bidet you are using. There are simple bidets that provide only a water sprayer or a bidet hose for cleaning after urinating or doing the other toilet business. While other advanced bidets expressly offer a front and rear wash, which can be more convenient for female use to get the perfect swap.

These advanced bidets have other features of choosing the different temperatures of water to be released and even air drying after use. Note that either a man or woman can also use advance bidets.

Advantages of Using Bidet as a Female

There are several benefits of using a washlet as a woman which contributes to why many people assume that only females should use it. Unlike men, the female reproductive and sex organs are much more open and visible. It’s possible and easier for infections to get into the body through the female sex organs.

Improper or little care of the female genitals can lead to an increase and exposure to bacteria and infections. Medical consultants have mostly recommended that plain water is the best cleaner for the female sex organs, which makes bidet the best product for that. The use of bidets can help eliminate and reduce the sprayed of impurity as it is plain water that comes out of a washlet.

Below are the health benefits of using a bidet as a woman:

Subsequently childbirth, the washlet can provide comfort and cleanliness for new mothers after their first few weeks of delivery. There is no use or less usage of wipes for cleaning during then, and as the body is in the healing process, the bidet is a perfect choice.

Is a Bidet for a Man or Woman? How to Use a Bidet as a Man

Just because the reproductive organ of a man is structured differently from that of a woman does not make them less entitled to use a bidet.

If you are man and skeptical of installing a bidet in your house, don’t be! Go ahead and install one or make use of it when you see it in a hotel or at a friend’s place.

Knowing that a bidet is for both a man and a woman, how do you use a bidet as a man? As a man, to use this washlet is even easier than using it as a woman (not literally). The procedure works the same; if you are using a bidet hose, a bidet seat attachment, the sprayer type, or the advance bidet.

Advantages of Using Bidet as a Male

Just like women, men can also benefit from using a bidet.  These benefits include:

Is a Bidet for a Man or Woman? Different Bidets for Separate Genders?

No. don’t purchase different bidets; a bidet for a man or woman does not require different genders using separate toilets. A man or a woman can use the same bidet provided both sexes cleanly maintain it.

Is a bidet for a man or woman? We hope now you know the answer! It is also necessary to include now that this washlet can also be used by grown-up kids too. That is because it can provide several health-related benefits.